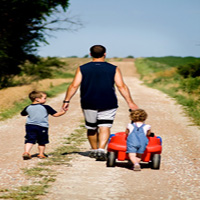 Custody battles after a divorce are never pleasant. Ultimately, the children’s best interests should be considered first. However, all too often, society’s perception of what is right for a child interferes with the proceedings. Due to outdated cultural perceptions of gender roles dating back centuries, there is a heavy bias toward favorable custody rights for mothers over fathers. Due to the subjectivity of divorce and custody court proceedings, it can be all too difficult to succumb to societal perception and stereotyping. In order to avoid this, it is necessary to understand the factors that are considered in child custody.

All too frequently, fathers find themselves treated as a “second-class parent.” They are granted cursory access to their child’s lives, when before they had been instrumental in them. The perception of the father as a “secondary parent” goes back a long time. In fact, for a long time, the letter of the law presumed that a child should stay with the mother after a divorce. While this is no longer the case, the current bias against fathers in custody battles stems from the same stereotypes.

Much of this is due to the subjectivity of factors considered in custody. In order to determine custody, courts look at who can be considered the “primary caregiver” in a parental unit. The primary caregiver is considered to be the parent that meets the majority of a child’s daily needs: feeding, bathing, playing, educating, or arranging for child care. For many years, such duties were expected to fall upon the mother, and while times have changed, many still allow their perceptions to be tainted by the old stereotype. This is not helped by the many other obtuse factors which are considered in custody battles, such as the strength of the parent-child bond, and the likelihood of a parent to foster and promote a healthy relationship with the other parent.